My uncle Jim Sheldon is retiring this month after teaching over 1,000 fifth graders in Napa for the past 39 years Jun 9 2010 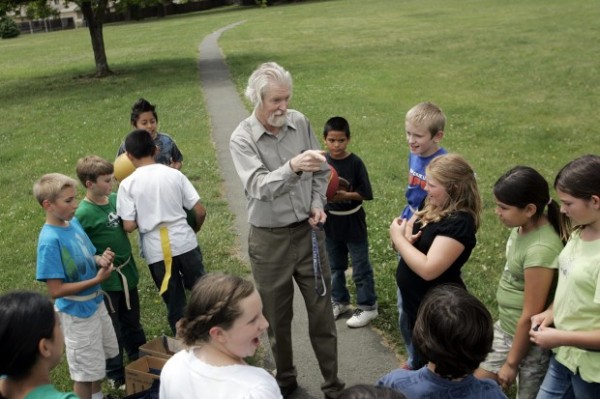 Pretty amazing life and career for my uncle Jim Sheldon who is retiring this year after teaching so many fifth graders.

Here’s the article about it from the Napa Valley Register:

Jim Sheldon knows room 10 on the El Centro Elementary School campus like the back of his hand.

The teacher spent almost four decades teaching in the same classroom, working mostly with fifth-graders, an age group Sheldon has built his career around.

“They’re aware of other people and I like that,” he said. “They’re not particularly self-centered (and) they’re developing a sense of humor … a sense of humor is very important and I really enjoy laughing with my class.”

After 39 years and more than 1,000 former students, Sheldon has had countless chances to do just that. “The best thing about teaching is seeing former students,” he said. “I just like to catch up with their lives.”

Students and colleagues say he’s a master of knowing when to trade getting down to business for cutting loose. He’s definitely in charge in the classroom, where he misses very little of what his 33 students are up to.

The kids love Sheldon — the consensus is that he’s fun but strict, a winning combination.

“He can be strict when it comes to work … but he kind of acts like a kid sometimes,” fifth-grader Jessica Vargas said.

Anastasia Hildebrandt, another of Sheldon’s students, agreed. “It’s a lot of fun being in his class, but it’s scary when he gets mad,” she said.

Sheldon, who won’t reveal his age and stands at least 6 feet 2, said being a tall male teacher doesn’t hurt when it comes to keeping his kids’ attention.

“I have a presence; I have a look,” he said. “I’m firm but fair, and when the kids buy into it, it’s a joy … I set the rules and expectations and I hold the kids to it.”

In the classroom, Sheldon doesn’t stay still much. One moment he’s at his desk — a landscape of flash cards, homework set in neat piles and a towering coffee mug — with students lined up, seeking help. Five minutes later, he’s ambling around the students’ desks, making sure they’re on task.

You can learn more about Sheldon from his classroom decor. A tiny orange paperweight shaped like a construction cone sitting atop a batch of paper is a good example.

The side of the cone reads: “There is no failure except in no longer trying.”

He is direct and patient while helping a fifth-grade boy with his math class work. Minutes later he’s helping another student.

Fifth-grader Celine Parra said she and her classmates will walk away from Sheldon’s classroom with valuable memories. One of her favorites was last Halloween when Sheldon came to class in full wrestling regalia, complete with faux-muscled arms made of blown-up balloons.

“He’s leaving and we’re going to miss him,” she said. “It’s so fun having him around.”

Alice Jackson, a former Phillips Charter School principal who taught fifth grade at El Centro from about 1973 to 1983, said Sheldon is “very dedicated and very tuned-in to individual students.”

Jackson credited Sheldon with starting an after-school soccer program in the 1970s before the sport took off in Napa. Sheldon is not afraid to go outside of his comfort zone, she said. In 1998, he left Napa to teach in Bristol, England, as part of a teacher exchange program.

A top tennis player in a local recreational program in the 1970s, Sheldon encouraged students to get involved in sports, the arts and earth-friendly causes, she said.

Nancy Caffo, an El Centro fourth-grade teacher who has known Sheldon professionally for 21 years, said students appreciate his gift for getting silly. One year, a student with a reputation for being tough said he was too embarrassed to wear a flannel nightgown for a school play. Sheldon took charge, donning the frock in class to show it was no big deal, she said.

Along with his wife, Nancy, Sheldon is known to weed the campus, fix light fixtures and retrieve soccer balls accidentally kicked onto the roof, Caffo said.

They’ve got some good comments on the article as well as a nice video featuring Jim talking about his teaching style: http://napavalleyregister.com/news/local/article_89ad05c4-72b5-11df-b4d1-001cc4c002e0.html

This entry was posted on Wednesday, June 9th, 2010 at 10:35 am and is filed under News. You can follow any responses to this entry through the RSS 2.0 feed. You can leave a response, or trackback from your own site.

2 Responses to “My uncle Jim Sheldon is retiring this month after teaching over 1,000 fifth graders in Napa for the past 39 years”