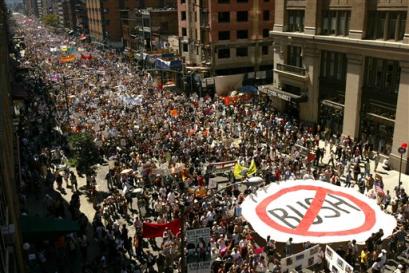 03:27 PM
Police have removed barricades at 30th and 7th, the march is starting to move north again.

03:25 PM
Police are reportedly arresting bikers heading uptown. They are trying to redirect people towards 5th ave. This may be a trap. 6 arrests are reported at 6th and 34th.

03:20 PM
At this point, the crowd is standing and waiting patiently. The police are going to let the march start again.

Pretty awesome to listen to the live reports from the streets of NYC hearing about the protests going on, especially since I’m pretty certain we won’t se almost ANYTHING about this here in St. Louis on broadcast network television. I could be wrong, but I don’t think so.

This entry was posted on Sunday, August 29th, 2004 at 2:48 pm and is filed under Politics. You can follow any responses to this entry through the RSS 2.0 feed. You can leave a response, or trackback from your own site.